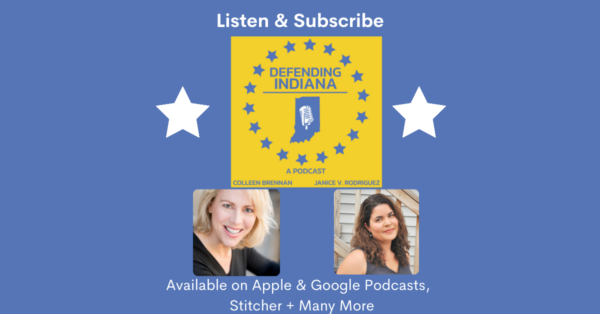 Feb 11, 2021 (Chicago, IL) — Defending Indiana, a new podcast hosted by Chicago-based comedians born and raised in Indiana Colleen Brennan and Janice V. Rodriguez, examines stereotypes, jokes and myths about the Hoosier state. Episodes feature special guests connected to Indiana who try to help Brennan and Rodriguez defend the Hoosier state. Their next episode, part one of a two-part series, going live on Wednesday February 17th, features Bloomington, IN native, filmmaker Angelo Pizzo (“Hoosiers” and “Rudy”). In these revealing episodes, Pizzo speaks extensively about how his Indiana upbringing has influenced his approach to filmmaking and storytelling.

Tired with all the jokes, myths and stereotypes they have encountered throughout life, Brennan and Rodriguez dissect the notion that Indiana is a flyover state in the middle of the U.S. known only for corn and basketball. Defending Indiana’s hosts sometimes find truth in those misconceptions but attempt to convince listeners there is far more to Indiana than meets the eye.

As Brennan explained, “We love our Hoosier home state, but it’s kind of like our siblings. We can make fun of it, but if you do, we’ll cut you.”

“I know Indiana can be the butt of some jokes, but we Hoosiers have so much to be proud of.,” Rodriguez said. “I lived in Florida for 10 years and it really opened my eyes to how much my values are shaped by growing up in Indiana and specifically ‘The Region’. As I’ve gotten older, I can really look at my time in Indiana and appreciate the foundation it has set for my life. But I can also make fun of it – in a loving way of course!”

Catch up on season one and subscribe to Defending Indiana on major platforms including Apple Podcasts, Google Podcasts, Stitcher & Spotify.

About
Inspired by the need to prove there is more than corn and basketball in Indiana, Colleen Brennan and Janice V. Rodriguez, Chicago-based comedians who were born and raised in Indiana, created Defending Indiana to poke fun and pay homage to their home state. Using humor, personal experiences, facts about the 50 states and special guests, Colleen and Janice discuss Indiana history, government and culture while discovering the good, the bad and the funny. Defending Indiana is perfect for anyone who likes combining a little education with their laughs.